I belong to a place named Silchar, which is located on the extreme southern corner of Assam, India. It happens to be the second largest city of Assam – peaceful, not as hybrid as other metros, yet seemingly self-sufficient with the apparent challenges and neglect from the administration.

No, I’m not here to bestow the geographic features or demographics, neither any nostalgic tale about my city or to educate about it, rather I want to share a little incident that shook my little town almost two decades ago.  I still have concrete memories of the happenings, which I’m going to share with you.

I don’t remember the exact year, but it must be sometime during the early 2000’s – ‘03 or ’04 – nevertheless, the time doesn’t matter, the story does. One of the traits of a small town is that it goes to sleep early, even today you won’t find a lot of activity after 10 at night and by 11 – it’s like a mini-curfew.

The peaceful town lost it’s calm when a piece of sudden news broke out about a mysterious spirit after it attacked an elderly lady at night. Even now, there are still some remote areas in my town where the toilets are built a little outside the living quarters. The lady was on her way to the bathroom when she was attacked by the spirit leaving scratch marks on her body and a god awful smell. The woman later described that she was attacked by a mysterious entity, and she could only see two scary glowing red eyes in the dark. 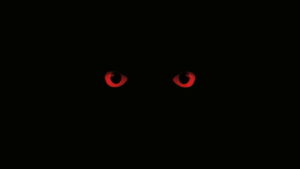 Initially, the entire episode was disregarded by many as some absurd fiction by an old woman, but quickly the whole town was in a state of terror when reports of multiple attacks soon surfaced. The locals started describing the attacks as the mischievous work of a un-holy spirit and named it Lal Bhoot meaning the red ghost since every victim’s story proclaimed that they were attacked by a mysterious entity with two glowing red eyes in the dark.

Soon the news of Lal Bhoot started to appear on the local newspapers. The local newspaper even advised people to stay indoors as early as possible and avoid roaming at night, especially alone, as the spirit seemed to attack individuals who were alone.

The whole town was covered in terror under the fear of a frightening soul, and it was almost like a curfew after 8 PM, as people were really scared to be outside. I was one of them. I used to have tuitions that used to get over by 7.30 PM and I used to be shit scared while returning home. I was not even 18 and had every reason to be scared.

One of the scary factors that contributed to the fear was the vicinity and surrounding of my place as there are a lot of places that are surrounded by trees and bereft of any light at night. Mobile phones weren’t there, and power cuts were like a catalyst of horror. Unlike the concrete jungle found in the cities my place still has its fair share of greenery, but back then it was the perfect backdrop for a horrific incident.

But things got really scary when another individual was attacked who lived pretty close to my house. It was exactly like the first attack, the victim had scratch marks on the body, reported an awful smell, and once again witnessed two gleaming red eyes in the dark. So, did Lal Bhoot finally arrived in my vicinity? Might sound silly now, but everyone back then, including myself, was scared to death.

The whole episode lasted for weeks, and the grasp of terror was spreading like a wildfire. People were uncertain about the next course of action, some were scared, some offered prayers, while others hoped that they don’t become the next unfortunate victim of the dreaded Lal Bhoot.

Finally, after weeks of horror, the truth was finally unveiled when the forest department made an official statement that they have captured a rare breed of a monkey with ‘Red Eyes’ that usually gets active during the night. It is still a mystery how such a rare breed of monkey actually made its way to the city, as no one had ever seen or witnessed such a species before, and even if someone did, not many were aware of it.

The forest department confirmed the attacks were carried out by the monkey, which was away from its natural habitat – lost, confused and hungry, which made it vulnerable to humans. I still don’t know what happened to the poor animal, but one thing was certain the terror of Lal Bhoot was over.

The whole story might sound stupid in the end, but believe me, the aura of fright that I experienced during those days still gives me goosebumps as well as a smirk.