It was 1518, July. Mrs. Frau Troffea began dancing on the street passionately in Strasbourg’s street.

She danced for six days and then others joined her.

Soon it was 34 people dancing, and then within a month, there were 400 dancers, mostly women!

Then some of them started dying. Some died of sudden heart attacks, and some from exhaustion.

It was one of the strangest and weirdest events called “The Dancing Plague.”

People were dancing to death!

That was when France witnessed this scary event.

There are some, who say the woman who started it, Mrs Troffea, danced for six days. A human can’t dance for two days continuously. Some people say she was already dead on the 6th day, but she was still dancing.

What do you think about the Dancing Plague? Was it some supernatural phenomena or science has an answer for that?

John Waller explored the human mind’s strange and extraordinary capabilities. He discussed what extreme limits irrationality and fear could lead a person too!

The dancing plague of Strasbourg was not the only event in the history where people started dancing erratically and abnormally and then died dancing!

There were other events too. Choremania, St. Vitus’s dance, and St. John’s dance are the other names used for such Dancing Mania.

All these events occurred between the 14th and the 17th century.

In the year 1374, such dancing mania occurred in Aachen, and then in 1518, it happened again in Strasbourg. Both of these events happened in the Holy Roman Empire!

Many believe that the dancing mania was a curse that was sent by St. Vitus or St. John.

People prayed to these saints to end the dancing mania.

Science said that dancing mania is just a disease of the nervous system or a kind of epilepsy or a collective mental disorder.

But was these events just madness or there was something more to them? 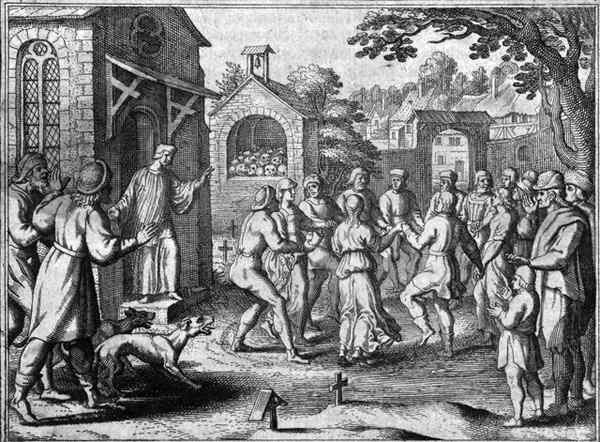 The earliest known outbreak was in the 7th century. Further, there are tales that it occurred a number of times after that.

These instances continued until the 17th century.

People believed that there could be something that can control them and make them do something.

Being controlled and punished for something was something that was more believable to them, and maybe that gave birth to the character of Pied Piper.

Pied Piper did that for revenge.

The whole idea of Pied Piper can be associated with the dancing mania because the character originated sometime during that period.

Yes, it was dancing.

The victims were not just shaking, convulsing, or trembling in any pattern.

They seemed to be, but they were dancing nevertheless.

It was a time when people were more superstitious. People had so little in their life that they easily resorted to superstition.

Moreover, people during those times were less “God-loving” but more “God-fearing.”

When someone is gullible, he/she usually surrenders to a belief and subconsciously plays along. Maybe that could’ve been the case.

John Waller said in his book that it was mainly false fear and anxiety that gripped that region. The fear that originated from the church legend was the main reason.

It was believed that if St. Vitus is provoked would curse the sinners with plagues.

So, I leave it to you, the readers.

Tell me what do you think of the dancing plague?

Was it something supernatural or just a dangerous result of superstition?